During 2017, the village suffered a dual blow. Permission was granted on appeal to demolish the White Lion and build five four-bedroomed houses on the plot. Almost simultaneously the Brookfield Golf Club closed and permission was granted to convert the clubhouse into a private dwelling.

This left our village with no pub or restaurant - nowhere to drop in and have a chat with neighbours. The only remaining public facility is the Community Hall of the Methodist Church which is available for hire, but not open daily. Also it is "dry" - i.e. no alcohol can be consumed on the premises.

Hankelow has a reputation as a place with a strong sense of community. A plan was put forward to build a new community building to provide a social centre for the village, and the possibility of obtaining land for this purpose was explored as part of a a "call for sites". One landowner proposed giving the village a site for a community building if in return he could develop his land.
At a drop-in session held to display the Neighbourhood Plan progress during November 2017, the concept of a community hub for Hankelow was strongly endorsed by residents, but the prospect of further development .was  less well received.
In view of the situation of the White Lion and the golf club, together with the drop-in comments and the offer of land in return for development, it was decided that there should be a second Public Consultation to ascertain the views of residents on how to provide a community hub. An additional factor was an offer by the Methodist Church to allow the village to purchase the Chapel and Community hall if they wished. Also to be fair to the other landowners who had potential sites for a new community building, they were also asked if they wished to offer land in return for a development opportunity.
During the week commencing 26th March 2018 the Questionnaire: Providing a Community Hub, Hankelow Neighbourhood Plan (Second Consultation) was hand delivered to each household within the Parish by members of the Neighbourhood Plan Steering Group and volunteers. A public meeting was held in the Community Hall on April 11th 2018, to explain the options and answer questions.The closing date for submitting answers was April 14th 2018, and 79% of residents responded.. The key results were displayed on this website by the use of the infographic shown below. 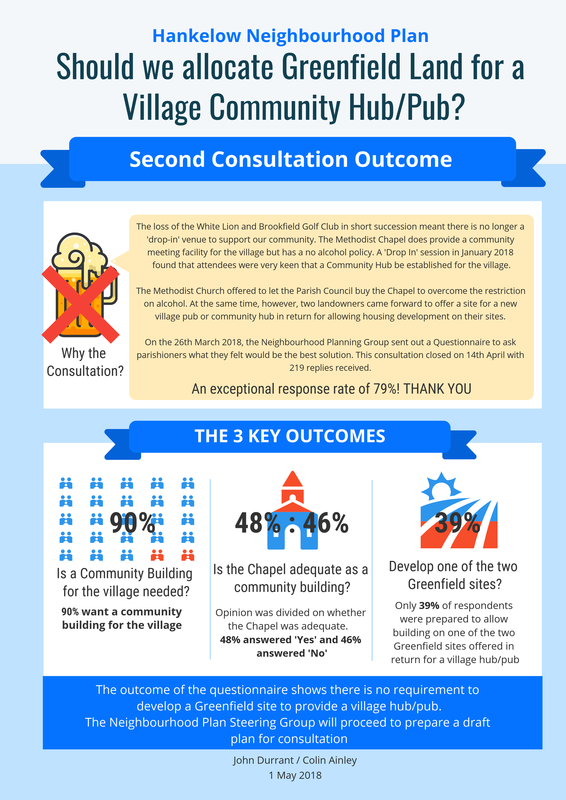